Sickle cell disease (SCD) is the most common life-threatening non-communicable disease of childhood globally. In most affected children SCD will significantly affect health-related quality of life (HRQoL) and reduce life expectancy. Bone marrow transplantation (BMT) has been known to cure SCD and improve HRQoL for almost four decades but a very small fraction of eligible SCD patients have had access to it, particularly from lower-income regions. This is largely due to the complexity, cost and risks of BMT. Since 2008 the Cure2Children Foundation (C2C), has supported the development of several services offering simplified and cost-conscious BMT directly in middle-income countries (MICs) in the Indian subcontinent. . Close to 700 BMTs have been performed, primarily for hemoglobinopathies, with outcomes comparable to those obtained in high-income regions but at a fraction of the cost, i.e. in the 10,000 to 20,000 USD range, all medical expenses included. BMT was partially subsidized in most patients. In the C2C experience cost may not be the most relevant factor limiting access to BMT, in fact, it's not much more expensive than an average quality car of which there are plenty in congested MIC major cities, but rather the support from local stakeholders and government. Moreover, while the per capita gross national income is not very different between India and, for example, Ghana, Angola or Nigeria, in sub-Saharan Africa there are much bigger issues with drugs or blood products costs and procurement,  as well as laboratory test quality.

Countries by income vs. Newbiorns with SCD 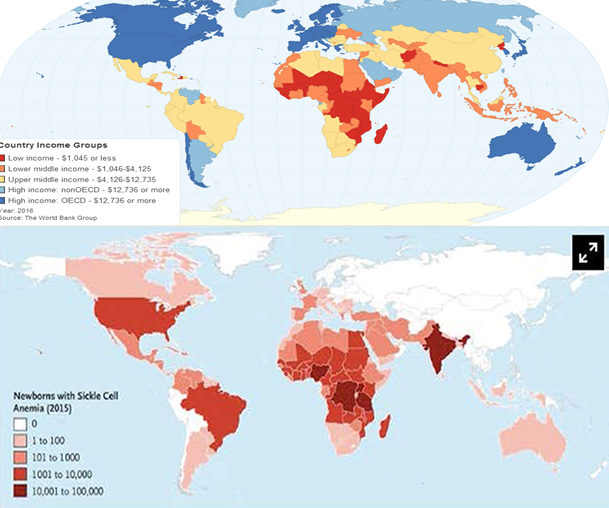